I was in London to give a speech on entrepreneurship at the Regent’s  University London as the guest of the UK’s Migrant Woman magazine and to moderate a panel for unBound Digital. With over 800 participants, unBound Digital is one of the most important events in London connecting digital entrepreneurs and angel investors from all over the world.

In the morning of the first day, I moderated a session on Global Innovation Trends, where Peter Chun, President of Apex Investment of South Korea, and Peter Greenhill, Director of the Business & Development Department of the Isle of Man were panel speakers.

Enjoy my articles at the Migrant Woman

The conference provides an ideal platform for meeting with key decision makers, thought leaders, investors, entrepreneurs and global corporations. In addition to the conference itself, unBound Digital includes a series of satellite events on cyber security, ecommerce, and gaming as well as a workshop area, Drones, Gadgets & Technology Showcase & Expo Arena. The unBound Digital community attracts those interested in innovation and the latest trends in digital technology.

Migrant Woman magazine is a commercial enterprise, producing a quality, content-rich monthly publication for and about migrant women. The mission is to feature appealing stories of interest that will inspire and empower an often-overlooked growing demographic with high aspirations, expectations, and achievements. Migrant Woman was founded by Mirela Sula, a successful woman entrepreneur of Albania who was highlighted as one of the 10 most important women entrepreneurs of 2014 by the International SME Council of the USA.

Enjoy her interview on one of the most important TV shows in Albania.

The magazine will highlight successful, professional and entrepreneurial women of all cultures and origins, not only those living in the UK – but all over the globe, shining a bright and positive light on their lives and business success, and showing how others have overcome adversity and challenges in their lives to lead a brighter and happier life.

Migrant Woman magazine is built on the idea of celebrating diversity, culture and the beauty of being a woman of the Universe. Women are the promoters of innovation, the mediators of change, the transmitters of values and the beholders of love and positivity.

Following early stage investment, the magazine will become sustainable through advertising revenue, paid-for promotional features, and event or networking activities. The magazine can be viewed online, on mobile devices and in its printed edition.

The vision is for Migrant Woman to grow as a valued and high status brand, building a personal and professional community that interacts, engages, participates and collaborates through the magazine, social media, and holding events with an opportunity to network. The overarching theme will be Love Connecting Women. 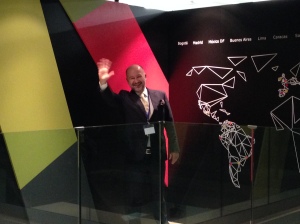 Wayra is a start-up accelerator that was started in Latin America and Spain in 2011 as an initiative of Telefónica’s chief executive in Europe, José María Álvarez-Pallete.

The start-up companies receive funding, office space and mentoring. In 2013, there were 14 Wayra academies in 12 countries in Europe and Latin America, and Telefónica planned to support about 350 start-ups altogether.

The manager of the Wayra Academy in London explained their business strategy: “It’s not just about the ideas. We are using Wayra as a way of acquiring great talent for Telefónica.”

Set in the heart of a royal park, Regent’s University London offers an unrivalled setting for higher education. The main campus in Regent’s Park enjoys beautiful, tranquil surroundings while being just minutes away from all that central London has to offer.

Regent’s University London is one of the UK’s most respected independent universities and one of the most internationally diverse, with students from more than 140 different countries worldwide.

Situated in the heart of Regent’s Park in central London, the main quadrangle of classrooms is surrounded by halls of residence, lawns and tennis courts. Beyond this lie the gardens and lakes of the beautiful Royal Park.

This peaceful environment is only a few minutes away from the financial centre of London, the West End and the many attractions of this exciting European city.

They offer a wide range of courses, including British and American degrees at undergraduate and postgraduate level, taught in a dynamic international environment.

I took the Turkish Airlines flight direct to London, where I would stay at the Holiday Inn Regent’s Park Hotel, located very close to Wayra in London. 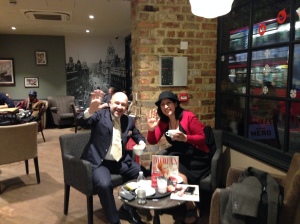 Mirela Sula collected me from the hotel around 6pm and we had a nice walking tour around Oxford Street, which included a break at a nice coffee house on the Street. Because Wayra was within a short walking distance, we arrived at the Wayra centre at 7.30pm, just in time to attend the Chairman’s reception.

Jossi Vard hosted a highly enjoyable reception at Wayra with an opening speech covering the topics of the panel series of the following day’s unDigital Bound. Until 9pm, we listened to the pitchings of entrepreneurs incubated at Wayra. There were also many entrepreneurs coming from outside the UK.

The President of Apex Investments, Peter Chun, came to this event with a delegation from South Korea. He had invited me to moderate the session where he would be the speaker.

I met with Peter Greenhill from the Isle of Man and Peter Chun about the flow of our panel.

At the reception, I met up with my friends from different countries who had come to London for this event.

It was a rainy day and Mirela picked me up from the hotel at 8.30am because the event was going to begin at 9am. We arrived on time. The venue was The Vinopolis, at 1 Bank End, London SE1 9BU, an excellent facility and many start-ups and providers had to stand in the entrance.

Innovation at the Hearh of Government Agenda

Takeaways from the session:

Here you can watch the whole session 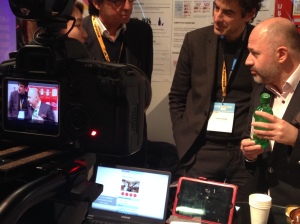 After the session, I was interviewed by the Korean government’s official broadcaster about innovation and entrepreneurship. We also included a Korean start-up in the interview who related what I said with her start-up project. When it is featured on TV in South Korea, I will post the link here.

Here you can watch it. Go to 44 minutes.

Around 4pm, we left the venue and went to Regent’s University London in Regent’s Park. Peter Chun joined us in a black cab for this wonderful, rainy London trip. Traffic was incredible and it would have been faster if we had walked instead of sitting in the cab. However, we were at the university on time and the conference started on time.

The venue was very nice and hospitality of the Regent’s team was great. Mirela’s team and Regent’s’ team were all very friendly and were very interested in entrepreneurship. Before the conference started, I also found an opportunity to hear about the new programme of Regent’s University from the Professor John S. N. Drew: the Developing a Family Business certificate programme.

This is a very interesting topic because most of running companies in real economies are run by family members. So, it is a very correct mission and vision to develop the management skills of the members of family businesses. Congratulations to the Regent’s University! If you are a member of a family business, do contact Professor Drew to get some advice: drewj@regents.ac.uk

More about the programme: www.regents.ac.uk/leaders 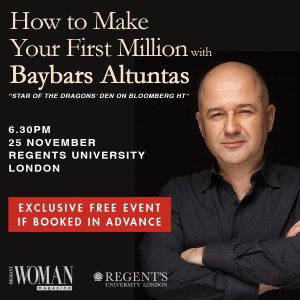 How to Make Your First Million, by Baybars Altuntas

Regent’s University announced my speech on the university’s website:

Here is an excecerpt of the session that appeared in Migrant Woman magazine:

More than 80 people attended Regent’s University London on 25th November to hear the Turkish Dragon entrepreneur and best selling author Baybars Altuntas talk about the secrets of his success and impart some of his wisdom and ideas for would-be entrepreneurs. Baybars talked about his transformation from travelling by bus and then a BMW within two years (he has written a book about it, Off the Bus, into a Supercar).

Baybars created Deulcom, which became a multi-million dollar business that started with a 400-dollar investment and is now the largest franchised chain of training schools in Turkey. He has met with US President Barack Obama and Vice President Joe Biden and travels the world to speak at conferences and encourage entrepreneurialism. Migrant Woman magazine welcomes his regular contributions and wisdom in the Dear Baybars section, for readers to ask questions related to their business or idea for starting one.

The ten key steps that Baybars recommends to become a millionaire from scratch are:

Here you can find a clip about the conference, photographs and my presentation:

Following the conference, a reception was held and a lucky entrepreneur won the lottery: A lunch with me in London! Now, it is up to me to arrange the date and time for this lunch before June 2015.

Rebecca Riofrio did me a great favor and produced a video of my speech and shared it online. She also conducted an interview with me, which will be published on social media. She is a very active entrepreneur who was received by Queen Elizabeth at Buckingham Palace. Her enterprise is Art in Fusion. 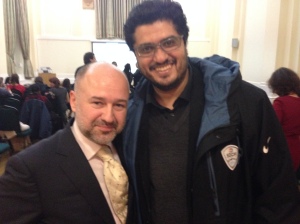 One of the very interesting people I met at the reception is Raj Rajilal. He is a Belgian-born Indian film producer now and was previously the film production assistant of Slumdog Millionaire. I am sure you all watched or have heard about Slumdog Millionaire, the story of a young boy becoming a millionaire after a TV competition in India. If you haven’t watched it yet, please do so.

After the reception, I had a chat with Tony Jeton Selimi, who presented me with a copy of his best-selling book A Path to Wisdom. He later wrote about my speech in his blog.

At the reception, I had an opportunity to meet with Turkish students studying in London who had come for my speech. Most of them were studying law and I believe I opened the doors for them to become law-preneurs as a result of my speech.J

I also enjoyed a discussion with Julian Childs, Career Coach and Business Advisor of Regent’s University London. If you are going to make a career in London, I think it would be a good idea to visit him first. You can find him easily via LinkedIn or else send an email directly to him: childsj@regents.ac.uk

The next morning, after a satisfying breakfast the hotel, I took a taxi to Paddington (10 minutes) and then took the fast train to Heathrow because it runs exactly on time. I left the hotel at 9am, was at Piccadilly at 9.20am, took the 9.30 train and was at the airport at 9:45. That is all! By the way, you can enjoy WIFI in the train – perfect!

The CIP Lounge for Turkish Airlines was near the entrance of my boarding gate and it was perfect. Apart from the magnificent one in Istanbul, this is definitely the best Turkish Airlines CIP lounge. It is not as big as the Istanbul one, but everything was perfect. You can see photos of the lounge below.

I’d like to thank Peter Chun of South Korea for his invitation to the unBound Digital event and Mirela Sula for her invitation to Regent’s University London.

Thanks to the great team of Mirela Sula for putting all their efforts to make this initiative a great success!

Thanks, Tony! Thanks Trevor! You did a superb job! Thanks, Mireala, for becoming a bridge between me and the entrepreneurs of the Migrant Woman community. 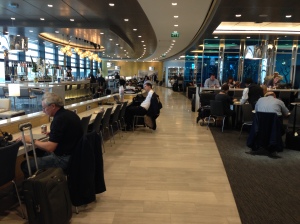 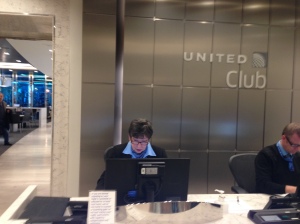 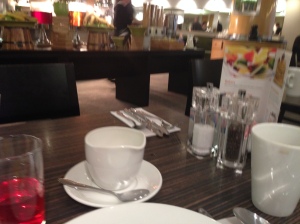 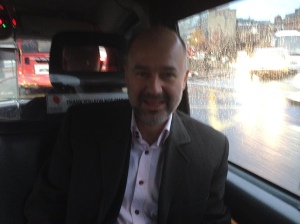 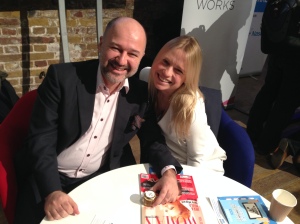 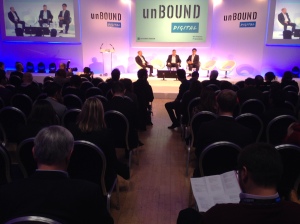 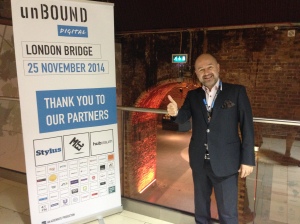